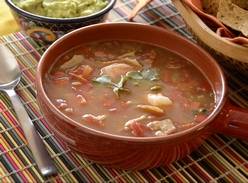 Adding chocolate to your shrimp tortilla soup is like a mole enchilada -- only you eat it with a spoon!

I love shrimp. I love tortilla chips. And I love, love, love chocolate, but, a shrimp and chocolate tortilla soup?

Absolutely! Think of it as a shrimp enchilada with mole sauce, only in soup form. Actually, this Paula Deen recipe is just a variation of tortilla soup, with the addition of cocoa powder, which gives it a dimension of richness and complexity in the way that a mole sauce would.

Of course, for the true Mexican cuisine aficionado, this is no mole. But, then, not many of us have the time and the patience to make a real mole, which involves a lot of toasting, roasting and grinding of chiles, spices, seeds and the like. When Rick Bayless, the mole master, was asked to make an Oaxacan black mole for a White House state dinner, it took him days and included more than 20 ingredients.

In any case, many mole sauces include chocolate. Hence, the cocoa powder in this delicious shrimp and tortilla soup adds richness without the sweetness.

Another twist in this recipe involves crushing the tortilla chips and using them to act as a thickener, which gives the soup a little more structure, as well as that nice corn flavor.

While it calls for shrimp, I see no reason why you couldn’t make this with chicken. Instead of the shrimp, simply add one to two cups of cooked chicken, either shredded or diced. For a vegetarian version, two cups of black beans would work, as well. (Hmmm, I am to give that one a try.)

Best of all, this is a good soup for tinkering. I tend to like things a bit on the spicy side so I double the heat when I’m making it just for me. You could add garlic, as well, or a squeeze of lime juice. This is a fairly forgiving recipe so adapt it as you like. Only the chocolate is mandatory!

Puree the soup using an immersion blender or hand-held mixer. Add the tortilla chips and add shrimp. Place the pan on low heat, cover, and simmer the soup about 5 to 10 minutes or until the shrimp are just cooked.

Ladle the soup into serving bowls and top with a dollop of sour cream.