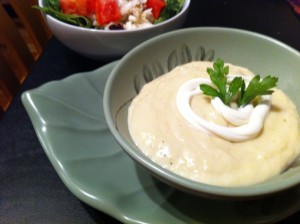 Vichyssoise is easy and elegant. It doesn't get better than that! Oh, and it's French. Sort of.

How is it possible to reach middle-age without ever eating vichyssoise?

I know I’m dating myself, but vichyssoise always reminds me of that old Bob Newhart shtick where he pretends he’s a nerdy Pfc.clerk typist in World War II, who was ordered to do phony one-way phone conversations to throw off the eavesdropping Germans.

“Blanke, the cook, is working out rather well, sir,” Newhart says into a phone. “Well one problem is his vichyssoise tastes a little too much like potato soup. Oh, it’s supposed to taste like potato soup …”

In any case, vichyssoise is my new favorite summer soup. (Goodbye gazpacho. It was nice while it lasted.)

Who would have thought cold potato soup could be so delightful? Its cold, creamy, potato-y-ness is like a savory milk shake and I mean that in the best possible way. It’s easy to make and very easy on the budget.

Plus, who doesn’t like saying they served vichyssoise for dinner?

Before you run off and act all French, however, here’s the kicker. It turns out vichyssoise is most likely an American dish. Who knew? Apparently, some chef at the Ritz Carlton in New York named Louis Diat told New Yorker magazine in 1950:

“In the summer of 1917, when I had been at the Ritz seven years, I reflected upon the potato and leek soup of my childhood which my mother and grandmother used to make. I recalled how during the summer my older brother and I used to cool it off by pouring in cold milk and how delicious it was. I resolved to make something of the sort for the patrons of the Ritz.”

There’s a little bit of controversy over this because the French probably invented potato leek soup – the hot kind – first. You say potato. I say vichyssoise. Cest la vie.

Wherever it’s from, it’s delish. As usual, I turn to my man Mark Bittman for the recipe. The only change I made was I soaked the cooked potatoes in vinegar overnight. I did this because I thought I was going to make potato salad (this is another great Bittman tip).

The result was the soup looked a teeny bit curdled, but the vinegar really added a pop. So try it that way, if you like, but you won’t ever go wrong by following Mark to the letter. Here’s Mark’s recipe from “How to Cook Everything Vegetarian.”

Put the butter or oil in a large, deep saucepan or casserole over medium heat. When the butter melts or the oils is hot, add the vegetables. Sprinkle with salt and pepper and cook, stirring, for 2 or 3 minutes.
Add the stock and cook until the vegetables are very tender, about 20 minutes.
Carefully puree the soup in a blender or with an emmersion blender, then return it to the pot. Stir in 1/2 to 1 cup cream, sour cream or yogurt.
Add salt and pepper as needed. Chill thoroughly before serving.